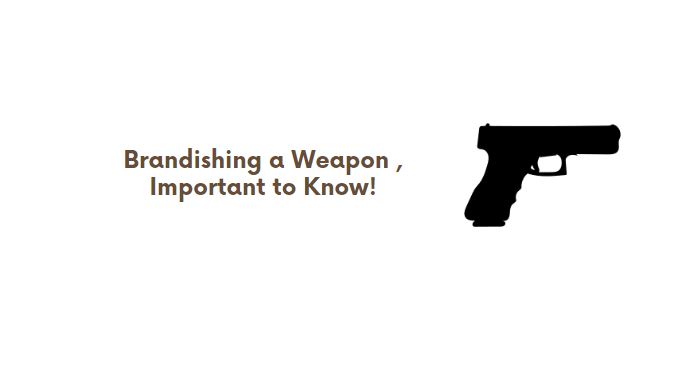 Brandishing a Weapon – Penal Code 417PC is a criminal offense to brandish firearms or any other deadly weapon. Brandishing is to show or draw an object in a manner that is intimidating or make use of it in fights or in any other way than for legal defense.

The crime is usually considered an misdemeanor that is punishable

Definition Of Brandishing Or Drawing A Firearm Under Penal Code 417

417. (a) (1) Every person who, except in self-defense, in the presence of any other person, draws or exhibits any deadly weapon whatsoever, other than a firearm, in a rude, angry, or threatening manner, or who in any manner, unlawfully uses a deadly weapon other than a firearm in any fight or quarrel is guilty of a misdemeanor, punishable by imprisonment in a county jail for not less than 30 days.

(2) Every person who, except in self-defense, in the presence of any other person, draws or exhibits any firearm, whether loaded or unloaded, in a rude, angry, or threatening manner, or who in any manner, unlawfully uses a firearm in any fight or quarrel is punishable as follows:

(A) If the violation occurs in a public place and the firearm is a pistol, revolver, or other firearm capable of being concealed upon the person, by imprisonment in a county jail for not less than three months and not more than one year, by a fine not to exceed one thousand dollars ($1,000), or by both that fine and imprisonment.

(B) In all cases other than that set forth in subparagraph (A), a misdemeanor, punishable by imprisonment in a county jail for not less than three months.

(b) Every person who, except in self-defense, in the presence of any other person, draws or exhibits any loaded firearm in a rude, angry, or threatening manner, or who, in any manner, unlawfully uses any loaded firearm in any fight or quarrel upon the grounds of any day care center, as defined in Section 1596.76 of the Health and Safety Code, or any facility where programs, including day care programs or recreational programs, are being conducted for persons under 18 years of age, including programs conducted by a nonprofit organization, during the hours in which the center or facility is open for use, shall be punished by imprisonment in the state prison for 16 months, or two or three years, or by imprisonment in a county jail for not less than three months, nor more than one year.

(c) Every person who, in the immediate presence of a peace officer, draws or exhibits any firearm, whether loaded or unloaded, in a rude, angry, or threatening manner, and who knows, or reasonably should know, by the officer’s uniformed appearance or other action of identification by the officer, that he or she is a peace officer engaged in the performance of his or her duties, and that peace officer is engaged in the performance of his or her duties, shall be punished by imprisonment in a county jail for not less than nine months and not to exceed one year, or in the state prison for 16 months, or two or three years.

(d) Except where a different penalty applies, every person who violates this section when the other person is in the process of cleaning up graffiti or vandalism is guilty of a misdemeanor, punishable by imprisonment in a county jail for not less than three months nor more than one year.

(e) As used in this section, “peace officer” means any person designated as a peace officer pursuant to Chapter 4.5 (commencing with Section 830) of Title 3 of Part 2.

(f) As used in this section, “public place” means any of the following:

(1) A public place in an incorporated city.

(2) A public street in an incorporated city.

(3) A public street in an unincorporated area.

Drawing or brandishing the firearm, or another dangerous weapon can be considered a crime pursuant to the Penal Code section 417, if the following four elements of the offense are proven:

Let’s look at these components in more detail to learn the way they’re applied.

A violation of this law is usually regarded as an misdemeanor (rather than an criminal offense (or an violation). A misdemeanor is a offense is punishable with a sentence of being imprisoned in a the county jail for up to one year.

For more severe sanctions for these weapons charges may include:

A firearm is definitely an extremely deadly weapon, however not all firearms that are deadly are firearms. For instance baseball bats dependent on the way it is utilized, can be deadly, however it is not considered a firearm. When a gun is used to brandish rather than being an extremely dangerous weapon that is, it is a crime that most minimal punishment is 90 days of jail. This is evidently the case that the legislature wanted to penalize the use of firearms more seriously than the use of a deadly weapon due to due to the inherent dangers inherent in firearms.

What Other Sentences Can Be Imposed?

If a gun, loaded or not when it is in the presence of a peace officer in the exercise of their obligations, then the maximum sentence is nine months within the county prison. The sentence may be up to one year in the county jail. The maximum sentence is 16 months in a state prison or two 3 years, or 2 years the state prison. This means that it could be charged as a misdemeanor that will result in a jail sentence for the county or classified as a felony that results in a prison sentence for the state.

The prosecutor is able to determine whether to charge it as a felony , or misdemeanor, based on the specific circumstances. This is also known by the term “wobbler” crime. If a firearm is used in a day care facility this is also wobbler-related and can result in the possibility of 90 days in prison.

What is the primary difference Between Assaulting with a Deadly weapon and brandishing?

The major distinction is that you do not are aiming to hurt the victim with a deadly weapon. This is that isn’t something you have to accomplish in a branding case. A lot of times in a case of brandishing, the defendant is only trying to scare people, but not harm the person. An unloaded gun is not able to be used in an attack since it would be used to harm anyone. However shooting a firearm that is unloaded violates the law of brandishing since there is no obligation to load it.

Are there legal defenses?

A defendant could argue the possibility of a legal argument in order to defend against the charges of a brandishing. In any event the D.A. must prove guilt beyond any reasonable doubt.

Three defenses that are commonly used include:

What are the penalties for 417 PC?

The majority of offenses under this statute are regarded as infractions that are misdemeanors. 7 The crime is punishable with prison within the jail of the county for a period of three months the one-year mark. Possessing a weapon that can be concealed or being concealed is an offense if it happens in a public space and/or on property owned by the public which can result in three months or a year in jail or the possibility of fines up to $1000. 8

Brandishing is a crime, regardless of whether it takes place in a school’s premises. However, when a person is seen brandishing guns on the premises of a daycare centrewhile it is available for use, the crime can be classified as an Wobbler. The person could be accused of one of the following::

Do these crimes lead to the deportation of citizens who are not citizens?

A conviction could be accompanied bynegative effects on immigration.

Can a conviction be expunged?

successful completion of probation, or

to complete the jail term (whichever is applicable).

If a person does not adhere to a probationary term and is found to be in violation, the party may still be able to get the violation wiped out. However, this will be at the discretion of the judge.

Under the Penal Code 1203.4, an expungement is a release from almost “all penalties and disabilities” due to being convicted. 12

Does a conviction affect a person’s gun rights?

The conviction of a person pursuant to PC 417 could result ina negative impact on the person who was convicted’s rights to gun.

In accordance with California statute, convicted felons are restricted from possessing or purchasing firearms in California. The same is true to those with at least two charges under PC 417.

So, a person who is a defendant can lose their firearm rights under this law if

the offense is regarded as criminal offense, or

He has been found guilty by the law more than times.

Are there crimes related to the brandishing of a weapon?

The following are the three criminal offenses related to the brandishing of a weapon or firearm. They are:

assault using a firearm PC 245a2 and